First Drive. Like this is just another road test…

The Dakar rally is the most spectacular and gruelling race in the world. The cars are amazing; designed for the harshest environments, they ford rivers, scramble over rocks, wade through mud, jump high in the air and race at high-speed on the dunes, flat-out for days on end.

One of the most successful car manufacturers, Bowler, is based in a sleepy village in Derbyshire where the team design and manufacture the Nemesis. This is a car based very loosely on the Range Rover Sport, but with added warp drive, and I’ve got the keys.

Amidst sand and rocks, with the sun shining and a beautiful big blue sky, I could be somewhere exotic like the dunes of Morocco, but actually I am in a quarry somewhere near Corby.

It exudes ‘fast’ like a saddled race horse. This particular example has completed a number of events and the TwinTex composite is scuffed where gravel and rocks have assaulted it. The door is so light that opening it is like turning the page of a Sunday newspaper. Stepping over the high side protection bar, I manage to slide into the deep racing bucket seat with all the grace of a greased octopus falling down a drain.

The dashboard looks like a cross between a cash machine and the flight deck of the Starship Enterprise. It’s styled to look similar to the Land Rover part, but it has an instrument binnacle with a large LCD display on both sides, a big rev counter and a small digital speed readout plus a few other basics. The co-pilot gets all the critical data to worry about, leaving the driver to concentrate on winning the race.

Starting the 4.4-litre Jaguar V8 lets loose a savage bark from the exhaust, which echoes round the old quarry walls like some sort of primeval beast letting the world know who’s boss. The stiff race-spec engine mounts transmit a tingling thrill of vibration through the car, `heightening the sense of anticipation.

Instantly it’s apparent that driving the Nemesis in its native environment is more fun than mere words can convey. It thrusts forward with indecent speed, throwing the horizon into my face, soaking up severe bumps and ruts as it charges over the moon-like terrain in a near deafening crescendo of mechanical aggression. It takes an off camber jump with ease, firing the car seemingly straight up on a path to the stars before landing hard yet gracefully on one corner, the long-travel suspension compressing with optimal control and allowing the power to be put down as soon as the car is on the ground again.

As it tackles the scenery with overwhelming capability, the drive is optimised by trick differentials with visco limited slip plus switchable air locking, allowing the wheels to dig deep into very tight bends as I stab the throttle to slingshot onto the straight. The suspension is amazing, supple yet always in full control, letting me pick the exact line I want between the rocks.

The car’s immense capability is a testament to the team’s high standards of engineering, honed over decades of working in the harsh world of competition vehicles. But my all-too-brief time with the Nemesis is over. I park up and ponder what a superb, pure bred, race machine this is.

Then it occurs to me that Land Rover’s great selling point is its every day practicality, and as this car shares about 40% of its DNA with a Range Rover Sport, I start to wonder how usable it is as an everyday car.

I convince the chaps from Bowler that I need to take it on a run to the shops; I suspect this is a first for them. We head out of the quarry, onto some nice twisty B roads and then into Corby town centre.

The car still feels absolutely wonderful, but in a different way. The Kumho race tyres are designed for grabbing lumps of the planet and throwing them rearwards, but they cope surprisingly well on tarmac. In fact the car handles much like a sports car, the 60/40 torque-split gives it a rear-wheel drive-like feel when powering out of roundabouts.

There is less roll than I was expecting too, probably to do with the fairly low centre of gravity and the anti-roll bars helping the massive double wishbones. On mini roundabouts I can really feel the clever diffs working and on full steering lock the car shudders ever so slightly, though it might be just shuddering at the horror of driving slowly up a high street rather than enjoying itself racing at full tilt through the dunes.

The only tricky bits are the brakes, which are very powerful and lead to some accidental emergency stops. The racing clutch and lightweight flywheel make it very easy to stall when trying to pull away gently too, hence the stalling in the Asda car park. Well, that’s my excuse anyway.

It turns out that driving a full-on Dakar race car into a local supermarket gets quite a lot of attention, I am not sure if it was the mud, the bright race paintwork or the exhaust sounding like the outbreak of war, but I have my suspicions.

Parking up is straightforward enough, although reversing is made a little tricky by the total absence of rear visibility, I have just the two door mirrors to work with, which are covered in mud.

People are looking at me as I open the door, twist the release buckle on the race harness and grapple my way out of the car. Now the next problem hits me; it’s a race car so it has no door locks, in fact it has no keys at all. But after a moment’s thought I realise that the alien world inside the cabin would stop any casual thief, so I nip into the shops to get a few essentials.

On my return to the car I ponder where to put my bags. There is a parcel shelf, which normally houses the crew’s crash helmets and other race kit. The doors are hollow and normally used for storing documents, maps, drinks and nibbles that are essential on desert rally stages which can last for hours. But for getting the whole weekly shop in the car I turn to the rear storage lockers, their normal contents include sand ladders, emergency tools and rescue equipment.

So all in all it still manages a remarkable degree of practicality, its lots of fun to drive and is awesomely capable. Could it be the ultimate sports car? All it would need to be a perfect road car is an easier clutch and brakes, an easier way of getting in and out, and probably some door locks would be a wise investment.

Or the Bowler EXR, which offers all of that. It gives the sport minded Sheik most of the ability of the race car in an accessible, easy to use package, ideal for weekend dune bashing or cruising the south of France. I’ll take one. 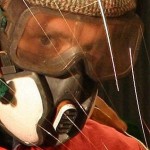 Ralph has been a senior engineer in the car industry for decades, working for the likes of Bentley, Jaguar, Land Rover and Ford. He is a chartered engineer and member of the Institute of the Motor Industry, which means he can put the initials 'Mimi' after his name and get free drinks at bars.