Toyota’s Verso had a pretty significant facelift last year, but still lagged behind some of its incredibly competent rivals from Citroen, Ford, SEAT and Vauxhall. In a bid to woo buyers to the smart looking Verso, the Japanese firm has borrowed some diesel engines from BMW and slotted them under the bonnet of their people carrier.

The new 1.6 litre diesel engine usually powers the Mini Cooper D and now propels the seven-seater, but only after the Toyota tech people have fiddled with electrics, mountings and other bits. There’s enough work done to call the engine a D-4D, something that’s important to the Japanese, with one technical team member telling me that the engine is as much 40% Toyota.

On paper though, it’s a little disappointing. Power is down slightly from the outgoing 2.0 litre unit, as you might expect, while economy is up and CO2 emissions have reduced, but it’s not by as much as you might hope.

An official combined economy figure of 62.8mpg is good, if not class-leading, while the CO2 emission come in at a nearly tax avoiding 119g/km, but Renault’s Grand Scenic and particularly the Grand C4 Picasso from Citroen both beat that by some margin.

However, the Verso does drive as well as any other MPV (bar the Ford Grand C-Max perhaps) which means that it rides comfortably, is quiet and refined enough on the motorway, and does the things you expect it to do when you turn the wheel.

Light steering makes life very easy, although there’s very little feel through the rim. Push things too hard and the Verso squeals its tyres in protest before eventually understeering, but it grips far better than you may expect and is never unruly. 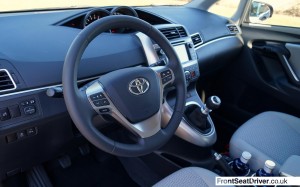 Only a slightly notchy gearbox with a large throw from second to third took the edge of the driving experience, but drivers in other cars on the launch event made no such complaint so I’ll concede that it may have just been either a one-off in my car or even my own driving style.

You might be using the gearbox a little more than anticipated though, as the power band is quite narrow. Steeper motorway climbs required a drop from sixth to fifth, while overtaking moves on tighter country roads needed a lot of planning ahead. Dropping the revs too low leaves you wanting, and introduces a lot of diesel clatter to events, but once it’s wound up things turn pleasant again. 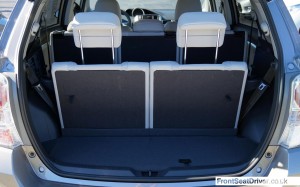 Inside it remains very much the Verso we know and appreciate. There are seven seats in three rows, with the rear-most two seats strictly for children only. Both the middle and rear rows fold down completely flat to leave a vast area for carrying around wardrobes, bikes or photocopiers, while the middle row slides back and forth and reclines to give those passengers a good degree of room and comfort.

Up front there’s a vast expanse of dull, grey plastic with some offset dials. Despite the addition of an impressive new Touch 2 infotainment system, it all looks very cheap. However, there’s no doubting the quality, with not a single squeak or rattle present despite some heavy handed treatment. 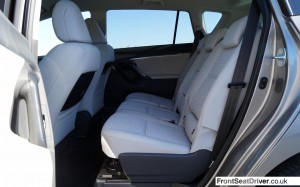 The design is a shame though. Their colleagues at Lexus are absolutely nailing interior design right now, but the Toyota models appear dated and cheap inside, and that’s across the range. Perhaps it’s time to get some of the Lexus design team over on secondment.

At least the seats are comfortable and supportive, with an upright driving position giving you good visibility all round. The fact that the Verso is more car-like in style than many MPVs makes it even easier to drive in the city. Only Mazda’s 5 feels more saloon-like.

The end result of the changes is a car that you’ll appreciate, but never love. Its discrete styling masks the practicality on offer, both in terms of passengers and load haling capacity, while it’s lower height makes it a more pleasant car to drive than many an MPV.

It’s robustly built and towards the front of the line for economy and tax, and is very competitive on price. With strong residuals expected, this is definitely a family car that the head could consider. But Toyota, please can we have something for the heart?