The original Continental Flying Spur was a successful product for Bentley, selling around 20,000 cars since its introduction in 2005. In dropping the Continental badge from the name Bentley is making a statement of intent that China and the USA, where owners prefer to ride in the rear, is where the bulk of the sales will be.

Dropping that link to the more overtly sporting models, even if it still shares a lot of mechanical parts under the skin, means the Spur is now being seen as a more complete luxury car good enough to take the fight to the Rolls-Royce Ghost as well as its more obvious rivals from Mercedes, Jaguar and Maserati.

That means that beneath the new skin, with its incredibly sharp waistline crease and visually wider stance, the Spur has been softened significantly from its predecessor. The softer ride goes towards the goal of completely isolating passengers from the outside world. The business leaders and entrepreneurs that will inhabit the back of the Flying Spur expect nothing less than constant refinement; whether it’s signing contracts, completing a Sudoku or watching a film, no road surface should disturb the buyer. 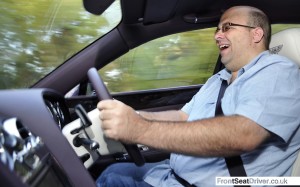 Always happy to drive cars I can’t afford, I got behind the wheel around the New Forest and central London to find out if it succeeds and, for the most part, it does. Rolling undulations in the road simply disappear, the car remaining so smooth that magic carets would choose to ride inside.

However, joints in the motorway can thud their way through to the cabin from time to time while at low speeds the aura of calm can be broken by potholes and cracked surfaces. It’s only minor though, and certainly less noticeable than you might find in the Maserati Quattroporte or even Jaguar XJ.

Anybody sitting inside could well be too distracted by the glorious cabin to really mind. In the back there is a choice of the traditional three seats (two full sized with a smaller temporary seat in the middle) or a dedicated two seat option. The latter puts a huge console between the rear seats that houses climate controls, a telephone, power sockets and even a fridge large enough to accommodate two champagne bottles. 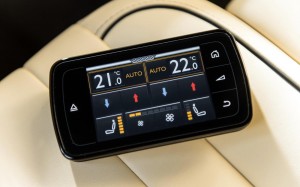 A multi-media kit can be specified in the Spur that adds two ten inch TV screens hooked up to a touch screen remote that looks after entertainment as well as the climate and navigation systems. It can also display readouts from the car such as the current speed – handy for keeping an eye on your chauffer.

The chauffer does get the better deal. Up front is another evolution of Bentley’s ‘wing’ dashboard; elegant, traditional and understated, while leaving you in no doubt about the quality behind it all.

Every surface you touch is either made of metal or covered with leather, apart from the oddly cheap feeling gearshift paddles behind the wheel, while extra padding lies between the leather and the dashboard structure leaving a soft feel that is truly sumptuous.

The seats are beautifully constructed, with my test car having stunning diamond-stitched perforated leather with a Bentley logo embroidered in the head rest, while a bank of buttons within arm’s reach allows me to adjust the ride height and suspension settings. This means that the Bentley boys, despite engineering the car to transport the elite in dignified comfort, haven’t forgotten that a car from Crewe still needs to shift. 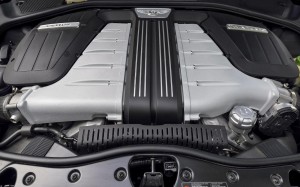 And shift it does. Under that long, sharply creased bonnet lies a six-litre engine that produces an almost obscene 616bhp. That power goes through an eight-speed automatic gearbox that shift ratios almost imperceptibly but, whatever the gear, there is simply so much power available that the Spur surges forwards without hesitation. Scenery becomes blurry very quickly indeed.

Corners approach quickly, but despite its two and a half tonne bulk, the Spur just turns, grips and goes. With permanent four-wheel drive and tyres as wide as the river Cam, even getting a wiggle from the back of the car takes severe provocation.

Bentley claims the Spur will happily achieve a maximum speed of 200mph, while the benchmark 0-60mph sprint can be despatched in just 4.3 seconds. I won’t argue with them.

It does that while returning an economy figure of 19.2mpg with CO2 emissions of 343g/km, a 13.5 per cent improvement on the old model. Of course, if you’re considering spending £140,900 on a car such as this then outright economy probably isn’t much of a worry. 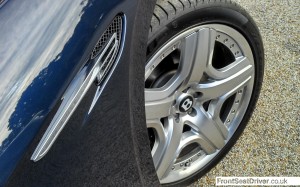 That figure is just the starting price, with virtually unlimited options available. Frustratingly, features such as cruise control and reversing cameras add close to £4,000 for items that really should be included at this level. Custom paints, bespoke leather hides and alloy wheel options can keep some shopping for weeks, making it remarkably easy to double the price of the Spur if you so choose – the possibilities are endless.

The Flying Spur is a vehicle with a split personality, and I mean that in the nicest possible way. That Bentley has managed to create a car that can waft an executive around in opulent surroundings, separated from the environment outside, but also able to burn rubber with the best of them is remarkable.

Bentley claim the Flying Spur is the ‘best luxury sedan in the World’. It’s a very bold claim, but one that could just be right.