It doesn’t happen very often, but just occasionally a manufacturer comes along with a new car that makes you sit back and think about what prospects the future could hold. The original Range Rover created an entire new market back in the 70s, while more recently Mazda proved with their MX-5 that you could once again enjoy driving without breaking the bank.

Now it’s BMW’s turn to create something ground breaking with their new electric car, the i3. While the electric motor and battery pack is conventional, the i3 brings to the market technology previously restricted to multi-million pound supercars and Formula One racers.

Built around a skeleton made from carbon-fibre-reinforced polymer, effectively a high-tech plastic that matches the strength of steel but with just half the weight, the i3 shares technology that was previously the reserve of supercars such as the £170,000 McLaren MP4-12C and £340,000 Lexus LF-A. That’s quite something for a £25,000 mass-produced vehicle.

It all keeps weight under control with the i3 tipping the scales at 1195kg even with a floor full of batteries, some 330kg lighter than the Nissan Leaf, its obvious all-electric rival. There’s weight saving steps taken throughout the entire car, with even the windows using a thinner glass to shave a few extra grams off the total, but never affecting the strength of the structure. 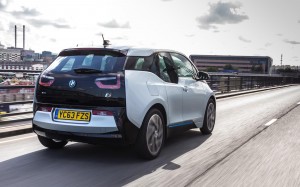 That strength allows the B-pillar, the brace that separates the front and rear doors, to be removed entirely, allowing the front door and rear coach style door to swing wide open allowing incredibly easy access to this compact city car.

Inside the innovations continue, with materials such as compressed dry grass being used in the dashboard structure and recycled drinks bottles being put to good use in the seat covers.

It’s the outside that will grab attention first though; the BMW i3 looks like a concept car put straight in to production and unlike any other BMW model past or present. The only real BMW design clue is the twin kidney grille, leaving the car looking clean and ultra-modern. Every other car on the road simply looks old fashioned now. 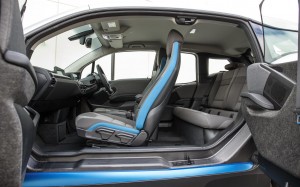 Underneath the skin there’s a 170bhp electric motor that is powered by 230kgs of batteries hidden under the floor. There are no gears, no flappy-paddles, just a choice of three driving modes: Comfort, Eco Pro and Eco Pro Plus, the latter limiting top speed to just 50mph and reducing the performance of the air condition system to minimise battery use.

However, the batteries are good for around 90 miles of use in normal driving, more than enough to cover the UK’s average 30 mile commute to the office. A three hour charge is all it takes to refill the batteries, while BMW will be introducing a solar-panel covered carport in due course that will keep your car topped up and feed power to your home.

Being a BMW, it should be a great car to drive. I was keen to find out if the i3 retained the sporty and involving driving dynamics of its bigger brothers, but that proved difficult. At the time of writing this, there are no i3’s available to drive in the UK although there will be plenty at dealers once the magazine goes to print.

Fortunately I managed to secure an incredibly brief experience of a production i3 in Frankfurt, covering just under a single mile before the car was taken away again. 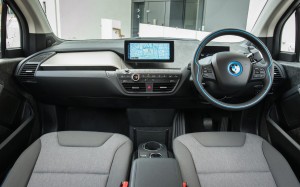 That is clearly not enough time to form a full opinion, but the good news is that the electric engine pulls away with remarkable speed, while it turns and stops with a surprising agility despite its skinny energy saving tyres. Noise was noticeable by its absence, the BMW being eerily quiet even when compared to other electric vehicles.

Stiff springs led to a rather firm ride, a setup UK buyers seem to prefer as it gives that sporty feel, but damping was a little soft allowing the i3 to lean rather a lot in corners. In the urban environments the car is likely to live in, it will feel nimble and manoeuvrable, but I fear potholes could upset the ride. 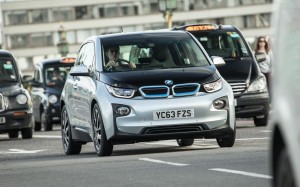 City driving will also be made easier thanks to the commanding view from the driver’s seat, although spotting any bodywork is impossible thanks to the steep angle of the stubby bonnet. Visibility to the rear is hampered by thick pillars and a narrow rear screen, but no worse than many other city cars.

However, all this is based on such a short time in the car that it’s difficult to draw conclusions and pass judgement.

With a presence missing from every previous electric vehicle rival and that futuristic styling that works so much better in the flesh than it does in photographs, the i3 is probably the first eco-car that could be described as desirable.

That, rather than all the tricks going on under the bonnet, could be what kick-starts the electric revolution. This is a car your head will love, but your heart will love it more.