Volvo’s new V40 range has been warmly received, with the premium hatch offering a range of cars markedly different from those from Audi and BMW, but without alienating their existing customers.

Now the Swedish firm has extended the range, adding a Cross Country model. Visually bridging the gap between family hatchback and SUV, the V40 Cross Country has all the hallmarks of a rugged Volvo; a raised ride height that lifts the car by four centimetres, roof rails, chunky plastic bumpers and silver skid plates front and rear.

It all comes together to convey a suitably rough and tough image, but there is one important difference when comparing it to Volvo’s current XC range. With so few buyers actually taking their cars off-road, the bosses at Gothenburg took the decision to keep this very much an on-road proposition. There are no mechanical changes to the car, with most remaining two wheel drive. Only the range-topping 254bhp 2.5-litre five-cylinder petrol comes with four-wheel drive, but at a cost of £33,875. 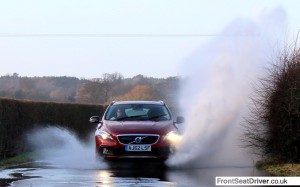 The Cross Country is therefore simply a rugged cosmetic upgrade that will broaden the appeal of the already capable V40, especially when combined with the diesel engine options.

Most popular of those will be the 115bhp 1.6-litre D2. This will return 74mpg and emit just 99 g/km of CO2, meaning the road tax will be at no cost. In normal driving there is just enough power to make good progress, motorway cruising is effortless while even moderate hills will not require down shifts thanks to the 200lb ft of torque available across the rev range.

Under power from standstill there is a hint of torque steer, but beyond that the Cross Country handles the roads extremely well. There is little feel through the steering wheel, but turn in to a corner and the car stays true to its line. Bumps and potholes are kept away from the cabin extremely well, with only the very roughest of surfaces making itself known inside. 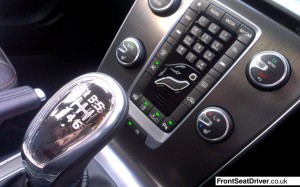 The cabin is a very pleasant place to spend some time, with even the base ‘SE’ model coming fitted with climate control, cruise control, five-inch colour screen, Bluetooth connectivity and more. Quality is on par with the likes of Audi and BMW too, the fit and finish being exemplary.

All this starts from £22,595, exactly £1,000 more than the equivalent standard V40 model. An additional £2,000 adds the Lux spec which sees virtually every optional extra box ticked.

As a cosmetic upgrade to a V40 on steroids for £1,000, the Cross Country works well. It’s just a shame there isn’t any extra cross-country ability included.