When somebody hands you the keys to a car with a price tag of £171,397 you expect something special. They also expect it back in one piece. Is the Bentley Continental GT V8 Convertible special enough to warrant the asking price, and did I manage to keep it on the road?

The Continental GTC has been around for some years now, powered throughout its life by a big 6.0 litre W12 engine. This puts out 567 bhp (575 ps) and enough torque to move a small country, which is fortunate as the car weighs around two and a half tonnes. All that power translates to a 0-60 mph time of just 4.4 seconds and fuel economy of 19 mpg.

The average Bentley owner probably doesn’t care too much about running costs, but something more efficient was needed. Enter the turbo-charged 4.0 litre V8 powered model I’m in. Despite being the poor relation of the W12, it still manages an impressive 500 bhp (507 ps) and loses just 0.3 seconds in the 0-60 mph sprint. 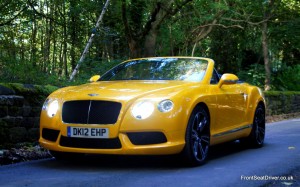 However, thanks to its lighter weight and clever gadgets – under light loads, half of the cylinders switch off to turn the car in to a V4 – economy is improved by some 40% to an impressive 25.9 mpg, with a similar drop in CO2 figures. Granted, you’re not going to be getting anything but the most expensive road tax rate, but it’s a start.

Brilliantly, the V8 doesn’t lose any of the magic of the W12. In fact, it’s better. The old 6.0 litre is a lazy engine, relying on its torque to pull the Continental through its day.

The new V8 however adds a degree of sportiness missing from the original, with an exhaust note that’s out of this world. Switch the gearbox to sport mode and the noise coming from the back of the car sounds like Thor himself is shouting down the exhaust pipes. 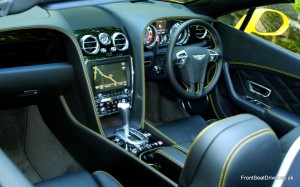 With the roof down there’s no way on Earth you’d ever be able to hit 25.9 mpg, as all you’ll be doing is pressing the loud pedal further and further in order to feel the orchestral rumblings resonating through the air. It’s a heady mix of 60’s Formula One and Spitfire engine and it just encourages you to press harder, go faster.

Despite that push from behind egging you on, and despite the two and a half tonnes of weight, the GTC is supremely composed.

The cabin shrinks the car around you, in a good way. Placing the car on country roads was far easier than anticipated, with good amounts of feel coming through from all four corners of the car. It’s not an outright sports car, but it’s easy to hustle along, the eight speed gearbox shifting between ratios effortlessly and unobtrusively. 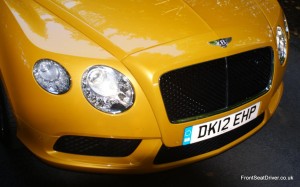 Exit a corner too quickly and there’s a hint of understeer, a gentle reminder to play sensibly. Play badly and throw the car around and the back end will eventually break traction, but it takes a lot of provocation to make the 275-section tyres let go. This is a car that will be able to cover great distances very easily, without incident and without drama.

It’s the drama that was oddly missing from the car though. Stepping inside the exquisitely finished cabin, it feels refined, enveloping, but lacking that little bit of extra sparkle; there’s no doubting the quality of the materials and the expertise involved in bolting it all together , but a sense of occasion was very notable by its absence.

Perhaps it was just the trim of this test car. Black leather seats, sumptuous and cosseting, with a gloss black dashboard and swathes of black leather trim. Only yellow stitching and a smattering of chrome highlighting lifted the mood. I can’t help but think that some lighter leather and a bit of wood would transform the experience in to something more in keeping with the cars character. 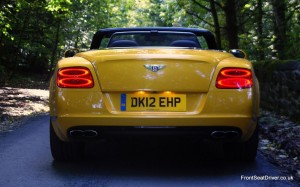 It’s a credit to the staff at Crewe that criticism of the car fundamentally comes down to the choice of colours. You’d be hard pushed to find another car quite so well crafted and with such a crushingly effective powertrain this side of Goodwood. The Maserati Grancabrio gets close but is flawed in so many areas, the roof doesn’t come off the Aston Martin Rapide, while the Rolls-Royce Phantom Drophead is gloriously magnificent but well over twice the price.

At that money there’s nothing else out there that makes such an entrance and commands such respect. It actually makes a lot of sense. Just pick your colours wisely.