As the spiritual successor to the Yaris Verso, first impressions are that the Verso-S is doing a better job than the earlier car. Externally, it’s a sharp-edged mini MPV rather than the rather bulbous ‘popemobile’ of old, although there’s a similarity to its most obvious rival, the Honda Jazz. That said, there’s little that can be done to differentiate the required boxy styling from other mini MPV competitors in this slightly dull but very worthy segment of the market.

The Verso-S is available with a single engine choice, a 1.33 litre VVT-i petrol engine that puts out 99 bhp through a choice of either a six speed manual gearbox or Toyota’s Multidrive S gearbox – a fancy way of saying CVT. That gearbox gives you all the benefits of CVT such as low engine noise and fuel use at speed, but also brings with it the biggest issue – noise under acceleration. Put your foot down and the engine revs round towards the redline and then stays there. In a big V8 that might sound great, but a tiny 1.33 litre engine just sounds harsh at that point.

It’s rapid enough though. The paperwork says the 0-60 run is despatched in just 13.3 seconds, although we knocked a whole second off that in testing. It’s all very light, so the engine keeps pulling up to motorway speeds without any problems, although there’s not much left in reserve once there. 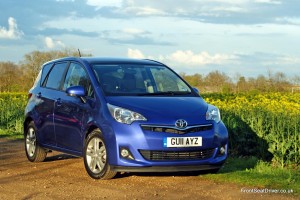 Inside, an upright seating position gives you a great view of what’s going on around you and that enables you to place the car accurately on the road. The steering is very light and lacks any real feel but for trundling around town and city roads it makes life very easy. The large glass area makes parking a breeze too, and a reversing camera makes it almost impossible to get wrong.

Space should be tight in a car that’s just four metres long, but the Verso-S seems to pack an awful lot in. There’s plenty of width in the front and room for two adults in the back. Squeezing three in would be possible but perhaps not pleasant. It certainly feels bigger than its arch rival, the Honda Jazz, and has a larger boot. With the seats up the Verso-S can cram 430 litres in the back, 50 more than in the Jazz, but the lack of a sliding rear bench takes away a little of the flexibility found in rivals. Fold the seats down and the Verso-S is positively cavernous, packing up to 1,388 litres in, way ahead of the Jazz’s 883 litres. 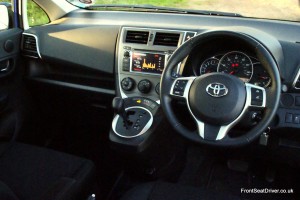 Ride quality is pretty good thanks to a very lightweight body; the whole car weighs barely a tonne, so Toyota haven’t had to put in overly stiff suspension to combat body roll, keeping the ride compliant and smooth. Out on faster roads the ride remains comfortable, although the seats lack much in the way of lateral support. When pushing on, the grip soon runs out and is replaced with easily controllable understeer but only in the most aggressive moments will the Verso-S be anything other than predictable. It’s competent and safe, but you won’t get out of the car grinning after a cross-country blast.

Toyota have a reputation for building things well, and the Verso-S is no exception. The quality of fit and finish is exemplary, although some of the materials feel a tad too hard and shiny, especially lower down in the cabin. We’re unsure if the door panel really needs four different textures, but there’ll be a happy interior designer somewhere. The interior is entirely conventional, with a large central speedometer being flanked by a rev counter on one side and fuel gauge and other warning lights to the other. It’s clear and ‘metal’ highlights give an air of quality. A touch screen multimedia system sits proud in the middle of the centre stack, giving a driver easy access to navigation, audio, economy information, Bluetooth and so on. It’s simple and works well. 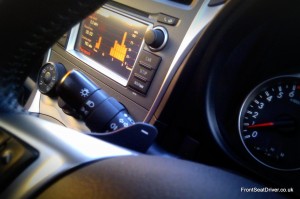 Outside the quality feel continues, although the metal work is very thin in order to keep the weight down; while the doors close with a clunk under normal use, it turns to a twang if you slam them hard. That thin metal covers the car in sharp edges and distinctive creases, making it stand out and disguising its size – despite being almost identical in size to a Honda Jazz, the Verso-S appears quite a bit larger. A massive panoramic roof adds a real premium feel to the car, too.

Safety wise, there’s seven airbags scattered around the Verso-S, as well as stability control and brake assist, so there’s a good chance to avoid the accident in the first place. ISOFIX child seat fixing points, whiplash reducing front seats, collapsible pedal supports and steering column, seatbelt pre-tensioners and force reduction systems, seatbelt warning lights and a passenger airbag cut off switch are all standard, as is an immobiliser, fuel cap lock and automatic central locking. There’s no spare wheel, but a tyre inflation kit complete with compressor is included. EuroNCAP haven’t tested the Verso-S, but both the bigger Verso and smaller Yaris scored five stars. 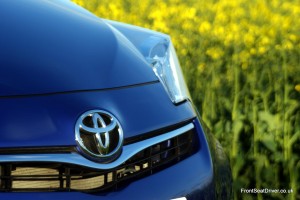 Starting at £14,995, the Verso-S appears expensive compared to every one of its rivals. The Honda Jazz starts at £12,320 for a model including air conditioning, while the larger Vauxhall Meriva starts at a tempting £12,500. However, go further up the spec range and the difference narrows, making the top T-Spirit model better value – at £16,105 including the panoramic roof, it’s actually slightly cheaper than the Jazz on a like for like basis. Fuel economy of 54 mpg (we got an impressive 45.9 mpg on our test route) and CO2 emissions putting the car in band C for road tax (£30 per year) helps claw back further ground, but you’ll still be better off financially with the Jazz.

Driving a hard bargain at your local Toyota dealer won’t help too much, despite discounts of around £1,000 being common, as Honda dealers will also negotiate. Granted, the Toyota comes with a five-year warranty, renowned reliability and a top quality owner experience, but the £2,500 difference in starting price to its nearest rival is just too big a gap for most to justify.