The Honda Insight was launched just over three years ago and it’s fair to say the reception wasn’t universally positive. In fact so scathing were some reviews that Honda introduced a revised model a little over 18 months later that addressed a lot of the issues of the first cars. Here we are just over three years in to the cars life and there’s another set of changes, but are they enough to make the Insight a viable alternative to the likes of the Toyota Prius?

Externally, Honda have done a good job of tidying up the Insight. There was nothing fundamentally wrong in the first place, but larger air intakes low down at the front and new head and tail lights makes the car look a little more aggressive. That’s then tempered with a blue stripe along the grille and blue glass on the headlights to represent the cars “high-tech hybrid identity”. Clearly blue is the new green.

Despite the changes, the aero-led design of the body still bears an uncanny resemblance to the Prius. However, inside things are very different. 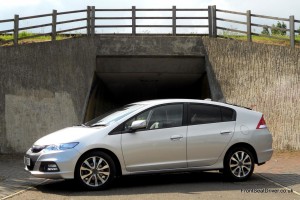 Where the Prius has a central digital instrument panel in white on black with a sombre grey centre stack, the Insight throws everything at the dashboard. There’s ten buttons on the steering wheel and a stereo with rotary control and wing-like buttons. The main instrument panel boasts two displays, one digital speedometer that sits above the large rev counter (with another digital display inside it), while another two digital displays look after the audio and climate control settings.

There’s certainly a lot going on and, at first glance, it’s overwhelming. However it very quickly becomes perfectly obvious and normal. The backlighting on the digital speedo changes from a soothing green through to an angry purple depending on how you’re driving, subtly reminding you that this is an eco model after all, while the secondary information below is clear and concise, despite the lights and colours. 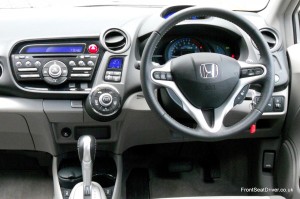 That reminder to drive sensibly should be taken to heart. With just a 1.3 litre 87 bhp (88 ps) petrol engine and a 9.7 kw electric motor to power a decent sized five seater family car, performance is never going to be a talking point. That said, a 0-60 mph time of 12.5 seconds is reasonable and, thanks to the CVT gearbox, progress can be surprisingly brisk. It’ll cruise happily at 70 mph, although that gearbox makes it sound rather thrashy getting up to speed. Once there it drops the revs and calm returns to the cabin.

Perhaps it’s best then to go for economy, something the Insight does very well. A long motorway cruise, four up, saw the car return well over 50 mpg while the run round the Front Seat Driver Test Route gave an average economy of 51.1 mpg – that compares reasonably favourably with the official combined figure of 65.7 mpg, although our route isn’t meant to replicate the official tests in any way.

It’s comfortable enough too. Primary ride, the cars ability to cope with bumps in the road, is fine at speed, although speed bumps catch it out a little. Secondary ride, smoothing those ripples and undulations, is well managed. The steering is very light however, and that can lead to some unintentional darting around as the front end responds very quickly to your inputs. 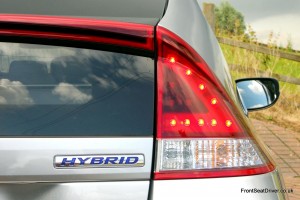 There can also be some unintended hesitations or surges in power too, as the switch between electric, petrol or a combination is sometimes a little clunky. It’s the stop-start that disappoints most though, as there’s a noticeable pause after the engine starts before power is transmitted, leading to some less than smooth getaways.

As bad as these sound though, they’re actually quite small issues and ones that you’ll learn to drive round after a few days. Once done, you’re left with a fine family car that shares a lot of positives with its obvious rival, the Toyota Prius.

Both are gentle on fuel, although the Prius’ official combined figure of 72.4 mpg edges the Insight’s 65.7, while both perform in a broadly similar fashion and neither attract road tax charges for now. Toyota are more generous with their warranty, covering the car for five years to Honda’s three, but neither vehicle is likely to cause many headaches.

A major selling point for the Honda Insight is that it’s around £2,000 cheaper than the Toyota Prius, which will more than cover the additional fuel you’ll be using, but the benefit of that depends on if you’re buying to reduce costs or reduce fossil fuel use.

Focus on the money and they end up about even. The decision then comes down to taking on the popular Prius with its sombre interior or the less common Insight with its nearly-a-Prius looks and neon interior.

Either way, you wouldn’t be making a mistake.