The Toyota GT86 is an important car for the Japanese manufacturer. Since the demise of the Supra, Celica and MR2, there’s been no ‘halo’ car in the range of worthy but functional family vehicles and, despite increasing sales, Toyota need a car that will get people talking about the brand.

Since revealing the GT86 concept in October 2009 at the Tokyo Motor Show, that’s exactly what’s happened. There hasn’t been a new car launched in recent times that has been so hotly anticipated; the promised formula of light weight, reasonable power and rear wheel drive characteristics, all developed in partnership with Subaru, has proven an irresistible combination for many, with commentators in internet forums, offices and bars all declaring that the GT86 will simply be awesome.

The GT86 four seater coupe is focused almost completely on driving pleasure. Power is provided by a 2.0 litre engine up front and sent to the rear wheels via a limited slip differential, while Toyota have worked hard to keep the weight and centre of gravity down.

For that reason it’s very compact, being around the same size as its most obvious rival, the Audi TT, quite a bit lower and an awful lot lighter. Add to that mix the fact that there’s 200 PS (197 bhp) on tap with no turbo chargers to hold up the power delivery and the GT86 should be a hoot. 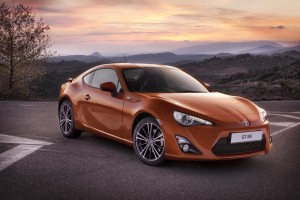 Under normal driving though, it’s oddly not that exciting, not that dramatic. The ride is firm but compliant, soaking up any imperfections on the smooth Spanish test roads with ease, although speed bumps thumped through the cabin. It’s reasonably quiet too, with the relatively skinny tyres producing little road noise alongside a slightly muted exhaust note. Push a bit too hard and the car understeers gently before the electronic wizardry on board brings everything back in to line.

There’s plenty of time to look around the cabin at this point. You sit low in the car, with your hip just 40 cm from the ground, with some very supportive seats holding you firmly in position. The short throw gear lever is positioned perfectly and offers a smooth and very quick change through the six ratios on offer. Elsewhere, it all feels very 80s, but in a good way. Switchgear is of the fighter jet style and there’s a big LED speedo nestled in the large central rev counter. That LED readout is carried on across the climate control system and the central clock. It’s definitely old school, but not old fashioned. 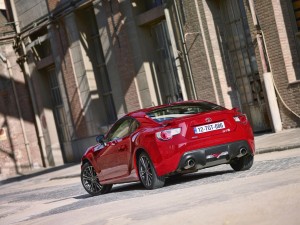 In the rear the seats are a token gesture. These fold down to make the sensible sized boot even more usable, while a pair of cupholders sit far enough back to be used by front or rear seat passengers. Just ahead of those are some buttons for switching the stability control to Sport mode, or off entirely.

If you ever drive or buy one of these cars, press that button. Every time.

Switching the car to Sport mode simply transforms it from a car that feels sensible and grown up to one that will make you smile on every journey. The GT86 no longer just follows a line prescribed by a computer but actually moves around and feels alive.

Now I understand what the GT86 is all about. Fun has been mentioned throughout the presentation, but only now is it clear just how much fun the car is. 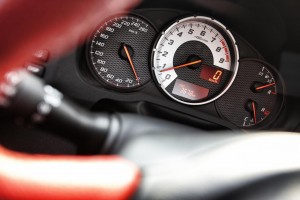 The trend of recent years has been to hunt for ever increasing power outputs, higher top speeds and faster times round the Nurburgring. Toyota have taken that and ignored it all; the skinny tyres (shared with a Prius) suddenly make sense when you’ve only got 200 PS to play with. There’s the perfect amount of grip, able to handle 95% of the power, the back end able to step out ever so slightly before the computers prevent it going further. They don’t stop play entirely, but keep the game moving.

The weight distribution of the car is near perfect, a 53/47 balance at rest but moving rearwards under power, the weight transfer keeping the tyres planted, a Torsen limited slip differential preventing wasting any of the power on wheelspin, until you push that bit harder. Never does it feel unsafe, just engaging.

Even the external bodywork helps here. The sharp edges on the front wings are visible from the driver’s seat, allowing you to place the car more accurately. 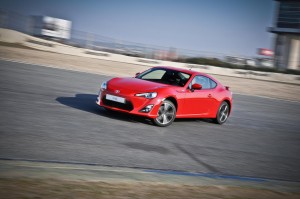 For those with more skill or bravery and a larger tyre budget, turning the systems off entirely allows plenty of sideways fun. It’s not really a car for drifting in, but at some point there’ll be an optional mechanical diff to replace the Torson one which will change that.

Eventually you’ll be able to order the car almost exactly as you’d like it, with an uprated brake system being the first such option. For the first time TRD parts will be officially available in the UK and there’ll be an annual upgrading of the car to keep it fresh and capable.

I really wanted to like this car and was so disappointed that it all felt so normal until I discovered that Sport button. From then on I’ve not stopped smiling and that’s not happened in a £25,000 car for some time.

For around the same price you could order a Peugeot RCZ or an Audi TT.