There seems to be an obsession with manufacturers to shout about their green credentials, with electric cars generally being designed with unusual shapes and containing countless flashing dashboard additions to admonish you for pressing the throttle too hard. Not at Renault however, where the Fluence ZE is completely… normal.

Based on the Korean Samsung SM3, which in turn is related to the latest Megane, the Fluence sits somewhere between the Megane and Laguna in size, thanks to a 15cm extension behind the rear seats. This doesn’t give the car any more boot space, but does mean the batteries can be located without interfering too much with the interior packaging.

And that’s a theme carried through elsewhere. The change from petrol to electric power is almost unnoticeable at rest, with nothing on the outside bar a discrete Z.E. badge to give any clues, while the interior could have been taken straight from any of the traditionally engined Renaults.

The game is given away when you turn the car on, as the near silent whirr of the electrics replace the engine noise you expect, but even at this point it’s all so ordinary; there’s no big LCD screen showing how well you’re driving, no coloured leaves to demonstrate how many trees you’ve saved, and no gaudy cladding to make the inside more ‘electric’. 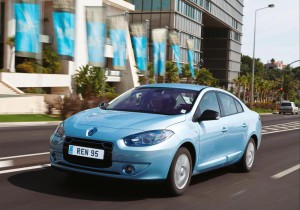 Instead there’s a spacious interior, with plenty of legroom in the rear. The seats are in a dark fabric, while the dashboard is traditionally dark, plastic and sombre, although a silver plastic swoosh livens things up slightly.

Even the instrument binnacle remains as normal as possible, with the only unusual aspect being the lack of a rev counter, replaced by a large battery meter. It’s all visible, clear, and gets the information you need to you without distraction.

There’s little to get excited about, but equally there’s nothing distasteful. It’s a mainstream Renault, and seemingly proud of it.

Out on the road it’s more of the same. The suspension is surprisingly soft, and struggles at times to keep control of the body roll, but then it weighs in at over 1,500kg. With a lot of the weight at the back of the car, the steering is light and there’s little feel, but the front end bites well enough and there’s no sense of impending doom. Just remember you’re driving an eco car and not a Renaultsport model and there won’t be any unpleasant surprises. 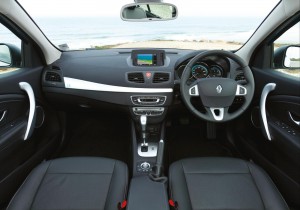 With instant torque from the electric motor, town driving is a breeze. It’s quick off the line, can cruise along quite happily at any speed, and the regenerative braking system is incredibly smooth meaning there’ll be no sudden and unexpected slowing of the car.

Top speed is limited to 84mph, and it’ll happily run close to that on motorway jaunts, but that will eat in to the battery range very quickly.

Ah, yes. Range. The one thing that people universally focus on when discussing electric cars. The Fluence produces less power than the similar Nissan Leaf (the French car produced 95hp) and so has a greater range, but at 115 miles it’s still unlikely to replace a families main car; getting from Front Seat Driver Towers to, for example, Alton Towers will leave us with 4 miles spare range, assuming we extract maximum efficiency all the way. 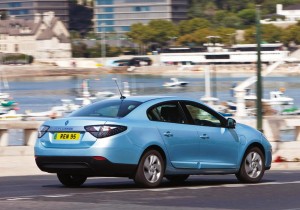 It differs from the Leaf in another important area too. Whilst the Leaf costs £26,000, the Fluence costs just £18,000 (both after the current government grant of £5,000). However, with the Renault model you’ll also need to lease the batteries, at a further cost of £70 a month. That sounds surprising, but offers some real benefits; should the batteries go wrong out of warranty on the Leaf, you’re looking at a bill of multiple thousands to replace them. On the Fluence, your leasing costs take care of that, and you might get to benefit from new battery technology that comes along in that time. Still, £70 a month is fair whack, although even after five years you’ve still saved around £4,000 over the cost of the Nissan.

The Fluence then is a capable, inexpensive (in electric car terms) option to the default choice of the Leaf. If you want to shout about your green credentials, the Leaf is the only choice you can make. If you’re a grown-up who needs a sensible car, the Fluence is there for you.

The Fluence won’t replace the Toyota Prius as the eco-warriors poster child, as it’s far too normal, ordinary, even bland, but in being so it makes a far better all-electric car than anything else that’s come to market yet. Its biggest threat has to be the forthcoming Zoe ZE due later this year. Fortunately for Renault, that’s one of their cars, too.