Can any car be fun? Here’s your answer…

Modern cars are of such a high standard that there is no such thing as a bad car, just one that is more or less good, and for years I’ve maintained that any modern car can be fun. So I was challenged to prove it.

The challenge was set to prove that what is perceived as being the dullest car on sale, the Toyota Prius, can actually entertain. Not simply drive up and down roads reliably and in comfort, but make you smile.

Nothing more specific was laid out, so I made life easier, and booked the amazing facilities at Millbrook Proving Ground for a day. I’d now have every kind of road and surface available to play on, with complete safety and no oncoming traffic.

Using a new Prius, kindly provided by Toyota, I collected some motoring friends and set off for my first drive in a full hybrid. As a road car, the Prius is exactly as you’d expect any other road car to be; it made no effort to appear overtly green, although the weight saving thin body panels made their presence known with a rattling twang when slamming the doors shut. It’s quiet, smooth, surprisingly firm, and just works. 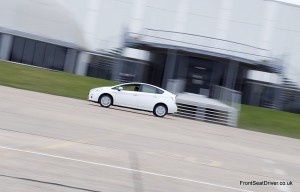 The official fuel economy figure of 72mpg is perhaps a little optimistic, but a smooth A-road run over 120 miles returned an average of exactly 50mpg, so it’s reasonably frugal.

But you’re not interested in that. You just want to know if you can have fun in a Prius.

Following a breakfast meeting at Little Chef where the crew assembled, we started out at Millbrook’s Steering Pad, getting to know the car a little. Hard turns, unsympathetic braking and rapid handbrake application was the order of the day, but the CVT gearbox and foot operated parking brake hindered progress. Our best handbrake turn frankly wouldn’t have looked out of place in a Halfords car park late on a Saturday night, such was its inadequacy. This wasn’t a good start, but was it us or the car?

Deciding to give up on that before we ruined the tyres, we headed to the High Speed Bowl. The Prius spec sheet suggested a top speed of 112mph, so that was our target. Pushing the 1.8 litre petrol engine and accompanying electric engine, we saw 121mph on the head up display. Whilst quick, the bowl is particularly undemanding, despite the barrier being just four feet from the car. No fun had yet been had. 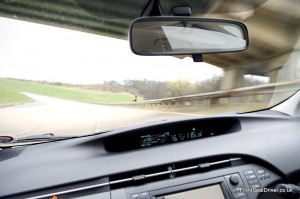 The City Handling Circuit was next, and this was going to be against the clock. A full course caution was handed out to any other users, as the various speed limits from 5 to 20mph were going to be ignored. The ridiculously narrow and twisty course, with hairpins tighter than a Prius can manage on full lock, finally unlocked some entertainment, with the HUD showing 64mph on one run, squirming under braking for every turn and generally being resentful of what was being asked. A best run of 1:36.7, a worst run of 1:40.6, between five drivers showed it’s at least consistent. And we’d started smiling. The brakes and tyres had also started to make their presence known.

Heading to the Hill Routes, it was time to stretch the legs of the Prius once more. Initially using Hill Route Two, a short 650 metre ovalish route that encompasses an elevation change of some 20 metres, the Prius was asked to perform harder than it’s ever gone before, with speeds of 81mph being achieved at the dip. On the top turn, the stability control interjects, suggesting the speeds are somewhat outlandish but, on the exit, gives up its fight and hands control back to the driver, just as the front washes away like a window cleaner on speed. Dropping two wheels just off the tarmac, the Prius waved a disapproving finger and showed its displeasure with a slide from the rear. I catch it with a dab of oppo and I’m away. 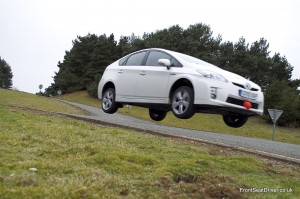 Away to Hill Route Three that is, with gradients of up to 21%. And not just up, but down as well. Heading in to the penultimate turn at a leery 55mph, after being advised to take it at 40mph, the following crest looms large, the suspension compresses, the car squats, and then… silence. The slippery shape of the Prius cuts through the air, unhindered by such things as tyre or tarmac, clear space beneath the chassis showing the aero treatment metered out all round to maintain the Cd 0.25 figure. Then… bang. We’re back down, and scrubbing off speed rapidly for the approaching left hander. Dramatic? Yes. Tidy? No. Fun? Hell yeah!

The photographer is unhappy though, so we have to go round again. And again. By the end of the run, I’m unsure if it’s my back or the Prius that has taken most abuse.

The high speed work done, we head back to the Steering Pad, more aware of the capabilities of the car. Handbrake turns still embarrass, but J-turns are a different matter. Slipping backwards at 30mph before flicking the wheel hard round, it’s actually possible to see the tyre shedding rubber, some of the hotter bits of which remain stuck to the door panels. Halfway round, it’s a move to Drive, straighten up the wheel, and power out. Yes, J-turns are possible. As are reverse donuts, and all manner of other inappropriate behaviour. Right up to the point that the Hybrid system overheated, but that’s nothing a ten minute break couldn’t fix.

All day there’d been nothing but smiles and laughter. Yes, that was in part due to the company we were keeping. But a big part was behaving this way with a Prius.

It performed far far better than anybody expected. It put up with more abuse in one day than most cars get in a lifetime, yet still it returned a surprisingly high 21.2mpg and still it started first time, took us home in comfort, and returned 50mpg once again. Amazing.

Thank to Millbrook Proving Ground Ltd. for helping to make this possible, and Toyota (GB) Ltd. for being brave enough to lend us the car. Thanks also to MPS Photography for taking some stunning pictures.